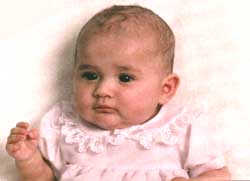 In the waning few minutes of July 4th as fireworks shattered a black velvet sky outside the hospital, I sat and gazed down on an exquisite newborn baby girl. Her tiny round head was crowned with downy black hair. Her little fists moved instinctively to her rosebud mouth. Her toes fanned and curled as she stretched her legs, as if she were trying out her boundless new home after such cramped quarters. How fitting, I thought, that this baby’s birth would be heralded with fireworks!

Tiffany Camile’s conception was under the worst condition imaginable. Her mother, Terri, was at a party where a seemingly innocent conversation led to her worst nightmare – Terri was raped. Two months later she faced the unthinkable – she was pregnant.

She had only one thought – get rid of “it.” She made an appointment at an abortion clinic. On the appointed day, she steeled her mind to silence her heart. As she lay on the table, waiting for the doctor to begin, she could no longer block out her heart’s cry, “You’re killing your baby for her father’s sin!”

She told the doctor to stop, forced herself off the table, got dressed and left. There was no relief in her decision however. Terri still faced an unwanted pregnancy that would be a constant reminder of that night. At 24 weeks, she again made an appointment for an abortion – and again she couldn’t go through with it.

That was when she called Women’s Choice Pregnancy Clinic. She wanted to adopt but didn’t know what to do. Just carrying the baby was difficult enough – it was simply too overwhelming to have to deal with the details of arranging an adoption. When we met, I assured her that she would not have to worry about anything. I contacted With Child, a Phoenix based Christian adoption program and together we worked out the details. Our goal was two fold: First, to place this child with a committed Christian couple who would raise her in the Lords’ nurture and admonition. Second, to help Terri through the adoption and grieving process so she could move on with her life without being haunted by her decision.

On July 7th, 72 hours after her baby’s birth, Terri, Tiffany Camille, the adoptive parents, Debbie and Mark came together. For Terri it was a both sad and freeing. She was saying good-by to the child she had carried for nine months. Despite the circumstances, she had bonded to her baby.

For Debbie and Mark, it was the culmination of their hopes and dreams of having a family. In a “Blessing Ceremony” that would give closure to all involved, Terri laid hands on both parents and gave her blessings as she transferred the authority for them to raise her child. A snippet of hair was placed in a heart locket, a gift to her from the adoptive parents.

When Debbie and I had first talked she told me her prayer was that God would give them a child who was a living testimony to God’s grace – a miracle child. God answered her prayers in Tiffany Camile.