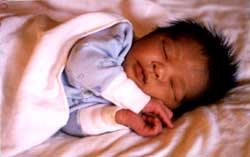 We needed a miracle. Julian’s mother came to White Mountain Pregnancy Clinic seeking an abortion. Upon seeing her baby boy during a sonogram she chose life.

Wanting no one to know her situation, she needed a place to go for the duration of her pregnancy. We sent her to a home in Phoenix. During her stay she came to know Christ. Her fervent wish for her son was that he would be placed with a Christian family.

This, however, seemed nearly impossible because he was half Native American and half African American. (It is extremely difficult to place Native American babies with non tribal families. The tribe must approve the adoption, something they rarely do.)

While the prayers were going up on Michael’s behalf, God was preparing the heart of Maurice and Suzi Provenche. They had adopted one baby, only to have her taken away because of a technical error which allowed the mother to change her mind. They were broken hearted. They then adopted their daughter. Desperately wanting more children, they were nonetheless wary of going through the procedure again. During a time of prayer, God spoke to Maurice that there would indeed be another child in their future. The waiting and wondering were almost too much to bear. Yet, they trusted in God’s promise as they prepared for the unknown child God had promised. Their joy was unspeakable when they received a call telling them that a baby boy was waiting for them.

There was only one problem. They would have to appear in tribal court with the mother and plead their case. Still trusting that God had ordained this adoption, they nervously appeared before the tribal judge, petitioning the court to release Michael to their custody for adoption. Standing next to them was the birth mother and grandmother. The judge, who was very kind and gentle, honored the birth mother’s request to allow the Provenche’s to adopt her son.

Two hours later the birth mother, grandmother, Maurice, Suzi and Director, Dinah Monahan met in the WCPC clinic for the “Blessing Ceremony.” The birth mother laid hands on the adoptive couple and prayed a prayer of blessing as she transferred the authority to raise her child to Maurice and Suzi. A minute alone, a tearful good-bye and the birth mother left, knowing God had heard her prayer and her son would be raised in a Christian home by parents who love him dearly.

Many people were involved in the care of Julian during the time it took to arrange his adoption – approximately two months. During that time, the counselors at WCPC fell in love with him. Over and over we were told that this adoption was close to impossible. But God had plans for Julian. When it was all over and Julian was home with his new mommy and daddy, all of us involved had a sense of awe, knowing that we had indeed been involved in a miracle!