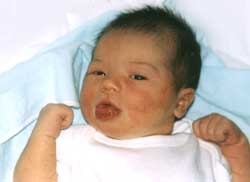 Casey Patrice – Ten days later, I found myself in the earliest hours of July 15th, sitting in the same rocking chair in the hospital nursery looking down on another beautiful, perfect baby girl. Casey Patrice had straight, black hair and dark eyes – just like her mother. She was alert and looked around as if in awe at this bright, colorful world after so many months of darkness. I had been there since 7:00 a.m. that morning coaching her mother through a difficult labor.

Her mother was in the worst possible situation. She was temporarily living in the Safe House, with no money, no possessions and no one who cared about her. She had no family to turn to and knew no one on the mountain. She had visited another women’s clinic in the area and all they offered was four abortionist’s numbers and transportation. I’m sure they felt this was one of “those cases” where the baby would be better off aborted! She found our brochure and called.

Upon meeting Casey’s mother it was clear to me that she was searching for more than physical needs. She was so eager to hear about the Bible and a God who loved her. As a Jew, she was interested yet suspect of the Messiah. “What if I believe in Him and he turned out to be a false prophet?” she asked. After studying prophesy Christ fulfilled she came to the conclusion that Jesus was the true Messiah and asked Him into her life.

She entertained the idea of parenting her baby but felt it would be best for both her baby and herself if she adopted. By then she was seeing evidence of a loving God as we found her a place to live, clothes and counseling. But, what she didn’t expect was the response of the women involved in the White Mountain Pregnancy Clinic. We all fell in love with her! God gave her a family in these women. As her pregnancy progressed, she attended church, studied the Bible and found peace during a time that should have been the worst in her life. She selected the perfect couple for her baby. Kim and Erin met Casey’s mother and they talked and cried together. All three of them sensed God’s perfect plan in this adoption. They were meant to adopt Casey!

Finally, after what seemed like an eternity, she went into labor on July 14th. As I coached her through the labor pains, I couldn’t help but be aware that I was witnessing the purest form of love. I felt privileged and humbled to be part of this incredible sacrifice. Any woman who endures labor knows that each pain brings her closer to holding her precious baby in her arms. This knowledge makes the labor bearable. But she was going through this pain so another woman could love and be loved by her child!

On July 17th, Casey’s mother, Kim, Erin and Casey met for the “Blessing Ceremony.” Like Terri, Casey’s mother laid hands on the adoptive parents as they held their baby and with a prayer and her blessing, transferred the authority to them to raise her child. She now wears a heart locket with a lock of her baby’s hair inside.

Casey’s mother said that this was the hardest thing she has ever done. Yet, she feels really good about her decision. She knows it was the right thing to do. She is now living on her own and working at the Heritage House. She wants to get her teacher’s credential so she can make a difference in other’s lives.