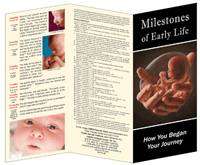 Day 1: Conception: Of the 200,000,000 sperm that try to penetrate the mother’s egg cell, only one succeeds. [1] At that very moment, a new and unique individual is formed. All of the inherited features of this new person are already set – whether it’s a boy or girl, the color of the eyes, the color of the hair, the dimples of the cheeks and the cleft of the chin. He or she is smaller than a grain of sugar, but the instructions are present for all that this person will ever become.

The first cell soon divides in two. Each of these new cells divides again and again as they travel toward the womb in search of a protected place to grow. [2]

Day 6-14: The new individual at first attaches loosely to the wall of the womb, then burrows deeply and attaches securely to it over the next week. Sensitive pregnancy tests can now show positive, but this depends on the level of hormone produced by the new life. By the end of the second week, the mother’s menstrual period is suppressed by this hormone (hCG) which is produced by her child. [3]

Day 17: Blood vessels begin to form. [4] Remarkably, the future sex cells that will give rise to sperm or eggs for a new generation begin to group together – only 17 days after this new life is alive itself. [5]

Day 28-32: Two tiny arms make their appearance and budding legs follow two days later. [11] The beginnings of the mouth take shape. [12] The nose starts to develop. [13] The thyroid gland begins to grow. Blood flows in the baby’s veins but stays separate from the mother’s blood. The tongue now begins to form. The face now makes its first appearance. [14]

Day 36: The baby’s eyes develop their first color in the retina (see photo above, right). [15]

Day 40: The baby makes her first reflex movements. Touching around the mouth with a fine bristle causes her to flex her neck. [6]

Day 42: The baby develops nerve connections that will lead to a sense of smell. The brain is now divided into 3 parts – one to experience emotion and understand language, one for hearing, and one for seeing. [17] Joints begin to form. [18] Mother now misses second period.

Day 44: Buds of milk teeth appear. Facial muscles develop. [19] Eyelids begin to form, protecting the developing eyes. [20] Elbows take shape. Internal organs are present, but immature. 99% of muscles are present; each with its own nerve supply. [21] Electrical activity is detectable in brain. [22] 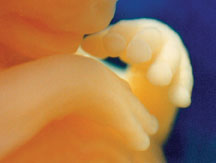 Day 52: Spontaneous movement begins. The baby then develops a whole collection of moves over the next 4 weeks including hiccupping, frowning, squinting, furrowing the brow, pursing the lips, moving individual arms and legs, head turning, touching the face, breathing (without air), stretching, opening the mouth, yawning, and sucking. [23] 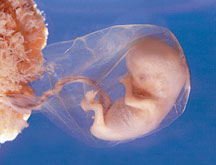 8 Weeks: The baby is now well-proportioned, and about the size of a thumb. Every organ is present. The liver is making blood, the kidneys function, and the heart beats steadily. The skull, elbows, and knees are forming. Of the 4,500 structures in the adult body, 4,000 are already present. [24] The skeleton of the arms and legs and the spine begins to stiffen as bone cells are added. [25]

9 Weeks: If prodded, the baby’s eyelids and hands close. Genitalia that were forming in the 7th week now become visible, indicating whether it’s a boy or girl. However, the doctor won’t be able to tell by ultrasound until the 12th to 20th week. Early muscular movements begin. The thyroid gland turns on. [26]

10 Weeks: Fingerprints begin their 7 week long formation. The fingernails begin to develop. The eyelids now fuse together until month 7, protecting the delicate eyes. [27] The number of connections between nerves and muscles has tripled since last week. [28]

11 Weeks: The baby now “practices” breathing, since she will have to breathe air immediately after birth. The baby urinates. Her stomach muscles can now contract. [29] Vocal chords and taste buds form. [30] She can make complex facial expressions and even smile. [31]

12 Weeks: Fine hair begins to grow on the upper lip and chin and eyebrows. [32] The baby swallows and responds to skin stimulation. [31]

13 Weeks: The face is prettier, and facial expressions may resemble the parents. The baby is active, but mom doesn’t feel anything yet. [33]

15 Weeks: A wild production of nerve cells begins and continues for a month. A second surge will occur at 25 weeks. [34]

4 Months: Nostrils and toenails become visible. The baby may suck her thumb, turn somersaults and has a firm grip. The ovaries of girls contain beginnings of eggs. She begins to develop sleeping habits. [31]

5 Months: The testes descend in boys. Mom may feel the baby kick, turn or hiccup and may be able to identify a bulge as an elbow or head. [37] Each side of the brain has a billion nerve cells now. [35]

6 Months: The baby will be able to hear by next week. [38] The child sleeps and wakes, nestling in her favorite positions to sleep, and stretches upon waking up. [39]

7 Months: The eyelids begin to reopen, preparing to see the outside world. [40] Eyelashes have now become well developed. [41]

8 Months: Skin becomes smooth. The pupils of eye respond to light. Fingernails reach to the tip of the finger. [41] The baby is really getting cramped now. 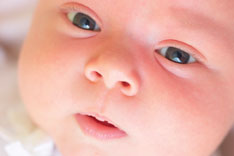 And not until the baby has gone through all these events on the inside can we see the new child on the outside.

Carnegie Developmental Stages, developed by Streeter and O’Rahilly, are used universally to categorize the growth of the embryo into 23 stages during the first 8 weeks of life. Carnegie Stages are based on morphology – the form and structures within of the embryo. From embryo to embryo, the days required to get to each stage can vary slightly. Also, O’Rahilly has suggested some changes in the days relating to each stage due to in vivo ultrasound studies. [42] Selected differences as reported by O’Rahilly are detailed below.

1. Age in this brochure is given two ways: 1) days after fertilization or days from conception given by the top red number, and 2) days from last menstrual period, or LMP for short, given by the lower red number. Doctors use “LMP” because it is hard to know just when conception occurred. Here, we emphasize the age of the new life as it unfolds. Add 14 days to post-fertilization days to convert to the LMP days.

2. Measurements and weights from: O’Rahilly, R. and Muller, p. 491. Lengths of the baby are given in GL or Greatest Length, which excludes the limbs. GL closely follows CR or crown to rump measurements, but can also be used for very young embryos. GL is also the measurement used in ultrasonography.