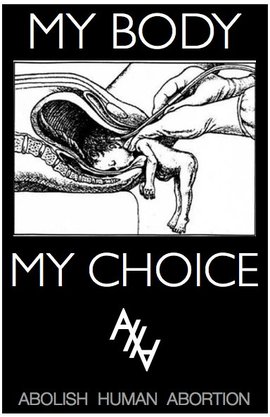 No matter how you spin it, women don’t have four arms and four legs when they’re pregnant. Those extra appendages belong to the tiny human being(s) living inside of them.

The slogan, “My Body, My Choice,” betrays a tragic misunderstanding of what is taking place inside the womb. At no point in pregnancy is the developing embryo or fetus simply a part of the mother’s body.

There are a number of clear biological facts, and all sorts of legal precedents, that easily refute the claim that the embryo or fetus is simply part of the mother’s body.

In half of all pregnancies, the unborn child is a male, meaning that even the sex of the child is different from the mother.

As Randy Alcorn states in his book Pro-Life Answers to Pro-Choice Arguments: [1]

A Chinese zygote implanted in a Swedish woman will always be Chinese, not Swedish, because his identity is based on his genetic code, not on that of the body in which he resides.

It is illegal to execute a pregnant woman on death row because the fetus living inside her is a distinct human being who cannot be executed for the crimes of the mother (International Covenant on Civil and Political Rights: Article 6.5).

When Scott Peterson killed his pregnant wife, Laci, he was convicted on two counts of murder.

Proof #9: Testimony of the “Father of Fetology”

Sir Albert Liley (the “Father of Fetology”) made this observation in a 1970 speech entitled, “The Termination of Pregnancy or the Extermination of the Fetus?”: [2]

Physiologically, we must accept that the conceptus is, in a very large measure, in charge of the pregnancy…. Biologically, at no stage can we subscribe to the view that the fetus is a mere appendage of the mother.

The late Christopher Hitchens, a prominent public intellectual, atheist, and abortion advocate wrote the following in his book, God is Not Great:
[3]

As a materialist, I think it has been demonstrated that an embryo is a separate body and entity, and not merely (as some really did used to argue) a growth on or in the female body. There used to be feminists who would say that it was more like an appendix or even—this was seriously maintained—a tumor. That nonsense seems to have stopped… Embryology confirms morality. The words “unborn child,” even when used in a politicized manner, describe a material reality.

Hitchens had other reasons for supporting legal abortion that can’t stand up to the other facts presented on this site, but he did recognize the absurdity of claiming that unborn children are simply part of the mother’s body.

The ovum and sperm are each a product of another’s body; unlike the conceptus, neither is an independent entity.

On a televised panel Faye Wattleton, former president of Planned Parenthood, countered the argument that an unborn baby is a living being by saying to a pro-life congressman: [4]

Your sperm are alive too.

Similarly, in a widely read article in Parade magazine, the late Carl Sagan attacked the position that abortion kills children by asking: [5] 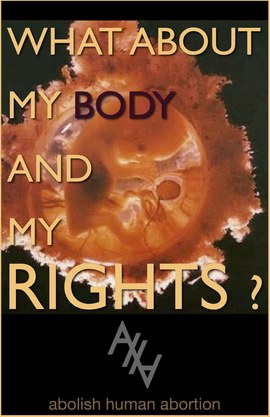 The answer, as every scientist should know, is that there is a vast and fundamental difference between sperm and unfertilized eggs on the one hand, and fertilized eggs, or zygotes, on the other.

In contrast, when egg and sperm are joined, a new, dynamic, and genetically distinct human life begins. This life is neither sperm nor egg nor a simple combination of both. It is independent, with a life of its own, on a rapid pace of self-directed development.

From the first instant of fertilization, that first single cell contains the entire genetic blueprint in all its complexity. This accounts for every detail of human development, including the child’s sex, hair and eye color, height, and skin tone. [6]
Take that single cell of the just conceived zygote, put it next to a chimpanzee cell or a gorilla cell, and “a geneticist could easily identify the human. Its humanity is already that strikingly apparent.” [7]

The physical remains after an abortion indicate the end not of a potential life, but of an actual life. 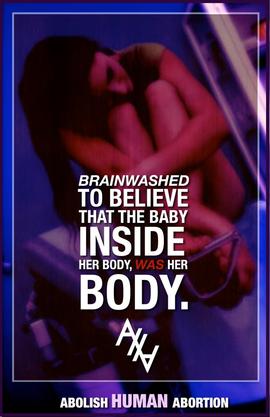 A film called “The Gift of Choice,” produced by the Religious Coalition for Abortion Rights, claims that the unborn is “a probability of a future person,” as opposed to the actuality of a present person.

But what is left after an abortion are small but perfectly formed body parts—arms and legs, hands and feet, torso and head.

Look at the abortion pictures at The Center for Bio-Ethical Reform and then decide for yourself if what you see was potential or actual human life. (Warning: very graphic images.)

It’s worth repeating over and over again; no matter how you spin it, women don’t have four arms and four legs when they’re pregnant. Those extra appendages belong to the tiny human being(s) living inside of them.

A long curved Mayo scissors may be necessary to decapitate and dismember the fetus.

Something nonhuman does not become human by getting older and bigger; whatever is human must be human from the beginning.

No individual living body can ‘become’ a person unless it already is a person. No living being can become anything other than what it already essentially is.

Thus it might be said that in all essential respects the individual is whoever he is going to become from the moment of impregnation. He already is this while not knowing this or anything else. Thereafter, his subsequent development cannot be described as becoming something he is not now. It can only be described as a process of achieving, a process of becoming the one he already is. Genetics teaches us that we were from the beginning what we essentially still are in every cell and in every generally human attribute and in every individual attribute.

Abortion assures that 650,000 females each year do not have control over their bodies.

Since about half of aborted babies are females, approximately 650,000 unborn females per year have their lives taken by surgical abortion in America. About twenty million females have died from abortion since it was legalized. A female who continues to be pregnant can still exercise basic control, though not absolute control, over her body and life. A female killed by abortion no longer has a body or a life and will never have the privilege of controlling one.

Not all things done with a person’s body are right, nor should they all be legally protected.

A man is not permitted to expose himself in public. Many places have laws against public urination. Prostitution is usually illegal. So is taking certain drugs. Most of us agree with these laws, yet they all restrict our freedom to do certain things with our bodies. My hand is part of my body, but I am not free to use it to strike you or steal from you or to hurt an innocent child. The key question is whether what is done with one person’s body brings significant harm to others. Clearly, abortion does.

Pro-lifers do not oppose the right to reproduce. What they oppose is the right to kill a child after reproduction has taken place. “Abortion rights” are not reproductive rights, but child-killing rights.

Even pro-choicers must acknowledge that the “right to control one’s body” argument has no validity if the unborn is a human being.

The fact that restricting access to abortion has tragic side effects does not, in itself, show that the restrictions are unjustified, since murder is wrong regardless of the consequences of prohibiting it; and the appeal to the right to control one’s body, which is generally construed as a property right, is at best a rather feeble argument for the permissibility of abortion. Mere ownership does not give me the right to kill innocent people whom I find on my property, and indeed I am apt to be held responsible if such people injure themselves while on my property. It is equally unclear that I have any moral right to expel an innocent person from my property when I know that doing so will result in his death.

Too often “the right to control my life” becomes the right to hurt and oppress others for my own advantage.

Whenever one group of human beings affirms its rights to determine the fate of other human beings, it is the beginning of oppression. Whites used blacks to enhance their own quality of life but did so at the expense of blacks. Men have often used women to live their lives as they wanted but at the expense of the women.

Ironically, the same oppression that women have sometimes endured from men is inflicted upon unborn children in abortion. Some men have used their greater size and strength to justify their mistreatment of women, as if his size gives him the right to control another. Today some women use their greater size and strength to justify taking away the rights and lives of unborn children.

In most cases, control over the body can be exercised to prevent pregnancy in the first place.

Except in the rare case of pregnancy by rape, a child-carrying woman has made choices of control over her body that have resulted in the pregnancy. She has chosen whether to have sex and whether to use birth control.

She has the full right to make these choices, and I would not want to see those rights taken from her. But these control-choices she has already made have ushered in a whole new scenario in which not simply her personal preferences, but also the life of another human being is now at stake.

It is demeaning to a woman’s body and self-esteem to regard pregnancy as an unnatural, negative, and “out of control” condition.

When women feel that a pregnant body is a body out of control, deviant, diseased, they are internalizing attitudes of low self-esteem toward the female body. These attitudes contradict the rightful feminist affirmation of pregnancy as a natural bodily function which deserves societal respect and accommodation.