Fact #12: Prior to abortion’s legalization, 90% of abortions were done by doctors, not by “coat hangers in back alleys.”

Home » Facts » Fact #12: Prior to abortion’s legalization, 90% of abortions were done by doctors, not by “coat hangers in back alleys.”

Some justify abortion on the claim that if it is outlawed, women will abort anyway and may die in the process. There are 3 problems with this hypothesis. First, it doesn’t address the ethics of abortion. Second, laws against abortion would deter most women from having one. Third, there is no evidence that illegal abortions are more dangerous than legal abortions. Of course, even if the “coat hanger” argument was true (it’s not), then it’s still morally ridiculous to legalize procedures that kill innocent babies just to make the killing procedures less dangerous to the mother.

Fifteen years before abortion was legal in America, around 85 percent of illegal abortions were done by: [1]

Reputable physicians in good standing in their local medical associations.

90% of all illegal abortions are presently done by physicians.

The vast majority of abortions were not done in back alleys, but in the back offices of licensed physicians. Were these doctors “butchers,” as pro-choice advocates claim?

The majority of physicians performing abortions after legalization were the same ones doing it before legalization.

Neither their training nor their equipment improved when abortion was decriminalized. Either they were not butchers before legalization, or they continued to be butchers after legalization. It cannot be argued both ways.

It is not true that tens of thousands of women were dying from illegal abortions before abortion was legalized.

Former abortion-rights activist Bernard Nathanson admits that he and his cofounders of NARAL fabricated the figure that a million women were getting illegal abortions in America each year. The average, he says, was actually ninety-eight thousand per year. Nonetheless, the abortion advocates fed their concocted figures to the media, who eagerly disseminated the false information.

Nathanson says that he and his associates also invented the “nice, round shocking figure” for the number of deaths from illegal abortions: [3]

It was always “5,000 to 10,000 deaths a year.” I confess that I knew the figures were totally false, and I suppose the others did too if they stopped to think of it. But in the “morality” of our revolution, it was a useful figure, widely accepted, so why go out of our way to correct it with honest statistics? The overriding concern was to get the laws [against abortion] eliminated, and anything within reason that had to be done was permissible.

Research confirms that the actual number of abortion deaths in the twenty-five years prior to 1973 averaged 250 a year, with a high of 388 in 1948. [4]
In I966, before the first state legalized abortion, 120 mothers died from abortion. [5]
By 1972 abortion was still illegal in 80 percent of the country, but the use of antibiotics had greatly reduced the risk. Hence, the number dropped to 39 maternal deaths from abortion that year. [6]
Dr. Christopher Tietze, a prominent statistician associated with Planned Parenthood, maintained that these are accurate figures, with a margin of error no greater than 10 percent. [7]

However, suppose that only one out of ten deaths from illegal abortion was properly identified. This would mean that the number of women dying the year before abortion was legalized would be less than four hundred, still only a fraction of the five to ten thousand claimed by pro-choice advocates.

The history of abortion in Poland invalidates claims that making abortion illegal would bring harm to women. 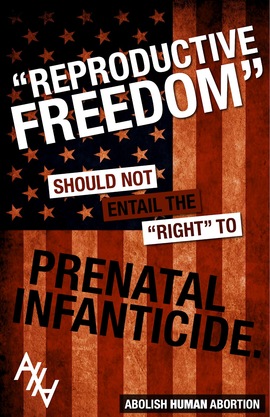 This was a spontaneous movement. It was at this time that abortion was made illegal in Poland except in the most exceptional cases. What was the result? Willke continues,

In 1998 the total number of induced abortions in Poland was 253. What were the reasons given for these? To save the “life and health” of the woman—199; for “fetal impairment”—45, for rape or incest—9.

In summary, then, here we have a large nation that, for four and a half decades, had abortion-on-request, paid for by the state. Certainly, the practice of abortion in Poland had become deeply ingrained. Then came independence and a law that took the total number of abortions down to 0.004% of what they had been, and this contrary to all predictions by government agencies, the media, the UN and Planned Parenthood. To perhaps everyone’s surprise, there have been 25% fewer miscarriages and 30% fewer women dying compared with what it had been while abortion was legal. In the latest annual report, 21 women died from pregnancy-related problems, with none listed as dying from illegal abortions.

These are firm statistics. The facts above have been annually reported and heatedly discussed by the Polish parliament, its ministries of health, labor, social welfare and education, as well as by mass media, nongovernmental organizations and anyone else interested in the problem.

If abortions are again forbidden, will illegal abortions, with all of their alleged tragic consequences, take their place? Certainly in Poland the answer is in—it is a resounding no. In fact, the women in Poland are clearly healthier now, from a gynecologic and obstetric standpoint, than they were when abortions were legal. [8]

Women still die from legal abortions in America. Abortion is normally not life threatening to the mother. However, the fatality rate is much higher than many pro-choice advocates admit.

For instance, a widely disseminated pro-choice video produced in the late 1980’s states: [9]

By 1979 the Federal government could not identify a single woman anywhere in this country who died of abortion.

This is an amazing statement, since many sources document a number of deaths from legal abortion. According to the American Journal of Obstetrics and Gynecology: [10]

The New York City Department of Health reported seven legal abortion-related deaths that occurred between 1980 and 1985. The cause of death in all cases was attributed directly to general anesthesia.

(These were seven deaths in a single city.) There were four abortion-caused deaths in a single Florida clinic between 1979 and 1983. [11]
In 1986, four doctors and researchers presented a study of no less than 193 deaths by legal abortion between 1972 and 1985. [12]
Qne researcher has uncovered the tragic cases of some 300 women who have died as a result of legal abortion. [13]

A woman died because of an abortion at our clinic, but the public never heard about it, and it wasn’t reported to the authorities as abortion related.

When the Chicago Sun-Times investigated Chicago-area abortion clinics in 1978, it uncovered the cases of twelve women who died of legal abortion but whose deaths had not been reported as abortion-related. [15]
Twelve unreported deaths from abortion in one small part of the country is a revealing number when the official statistics indicated twenty-one deaths from abortion in the entire country the previous year!

Statistics on death by abortion are dependent on the voluntary reporting of abortion clinics, who have much to lose and nothing to gain by doing so. [16]

The majority of abortion-related deaths of the mother occur not during surgery but afterward.

What makes abortion-related deaths hard to trace is that the majority of the deaths of the mother do not occur during the surgery but afterward. Hence, any number of secondary reasons are routinely identified as the cause of death:

Consider the mother who hemorrhaged, was transfused, got hepatitis, and died months later. Official cause of death? Hepatitis. Actual cause? Abortion.

A perforated uterus leads to pelvic abscess, sepsis [blood poisoning], and death. The official report of the cause of death may list pelvic abscess and septicemia. Abortion will not be listed.

If abortion became illegal, abortions would be done with medical equipment, not clothes hangers.

One woman told me, “People must think women are stupid. If abortion were illegal and I wanted one, I sure wouldn’t use a clothes hanger.” Since 90 percent of pre-1973 illegal abortions were done by doctors, it’s safe to assume many physicians would continue to give abortions. “Self-help” abortion kits are being widely promoted and distributed by proabortion groups who have vowed they will step up their efforts if abortion is made illegal again. [18]
Sadly, many women would continue to have abortions. But the “many” might be a quarter of a million rather than one and a half million. The result would be over a million mothers and babies annually saved from abortion.

Clothes hangers make effective propaganda pieces at prochoice rallies, but they do not accurately reflect what would happen if abortion were made illegal again. Clothes hangers would be used for baby clothes, not abortions.

We must not legalize procedures that kill the innocent just to make the killing process less hazardous. 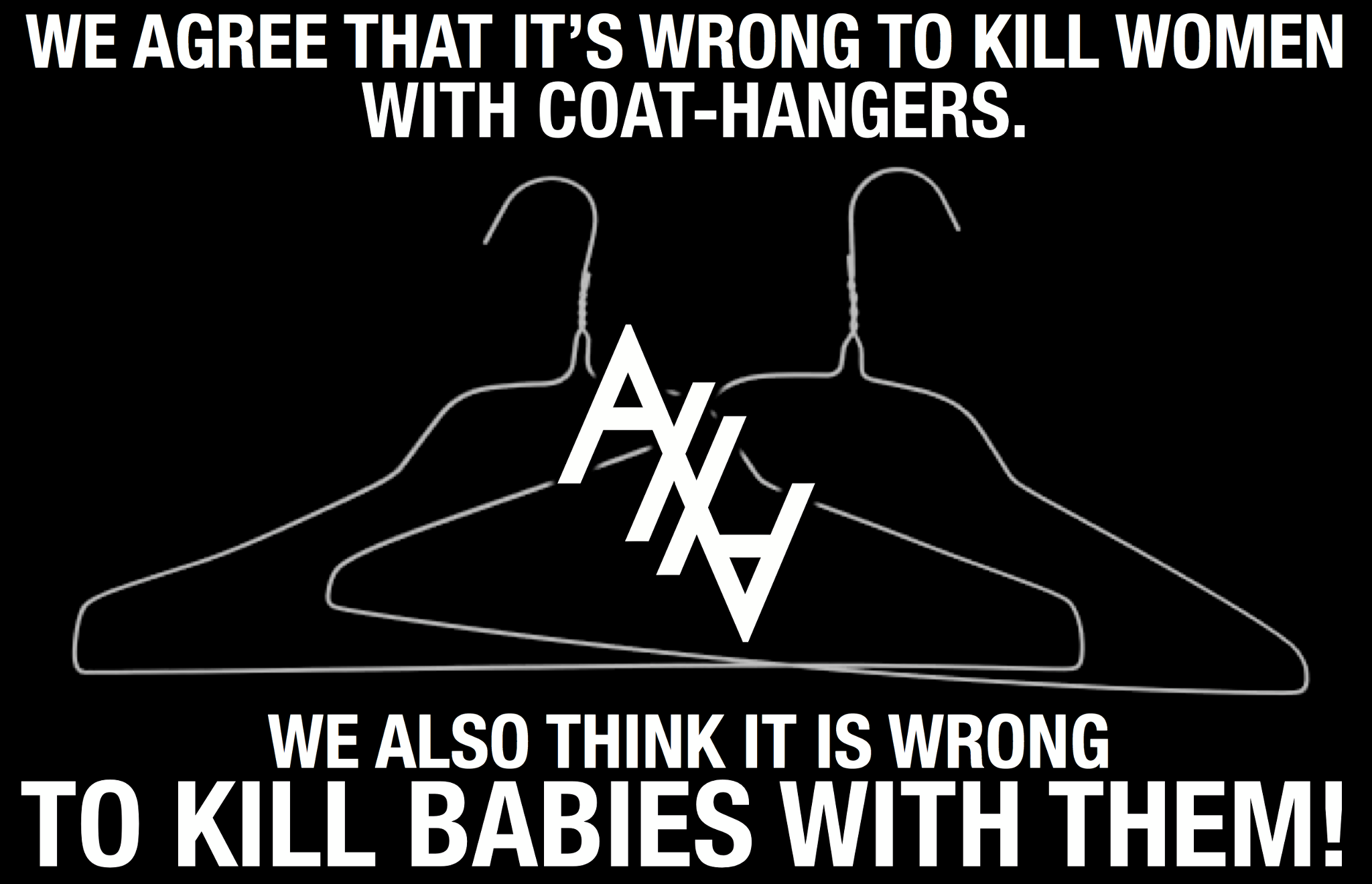 The coat-hanger argument is valid only if the unborn are not human beings, with commensurate human rights. Typically those appealing to the emotions through use of this argument completely avoid the real issue, since it is easier to talk about coat hangers than dead children.

From the child’s point of view, there is no such thing as a safe, legal abortion. It is always deadly. For every two people who enter an abortion clinic, only one comes out alive.

Rape is a horrible attack on an innocent human being, so we do not attempt to make rape safe and legal. We do not try to make kidnapping or child abuse safe and legal. If abortion kills children, our goal should not be to make it as safe and legal as possible, but to provide alternatives and legal restrictions that help avoid it in the first place.

Unfortunately, every horror that was true of illegai abortion is also true about legalized abortion. Many veterans of illegal abortion, however, do not realize this. Instead, they cling to the belief that all the pain and problems they suffered could have been avoided if only abortion had been legal.

They imagine that if their abortions had been legal, their lives would somehow be better today. Instead of recognizing that it is the very nature of abortion itself which caused their problems, they blame their suffering on the illegality of abortion at that time. [19]

Abortion is horrible primarily because it is a process in which instruments of death invade a woman’s body and kill her innocent child.

Neither laws nor slogans nor attractive waiting rooms nor advanced medical equipment can change the nature of abortion. What it is it will always be—the killing of children.

Some justify abortion on the claim that if it is outlawed, women will abort anyway and may die in the process. There are 3 problems with this hypothesis. First, it doesn’t address the ethics of abortion. Second, laws against abortion would deter most women from having one. Third, there is no evidence that illegal abortions are more dangerous than legal abortions. Of course, even if the “coat hanger” argument was true (it’s not), then it’s still morally ridiculous to legalize procedures that kill innocent babies just to make the killing procedures less dangerous to the mother.